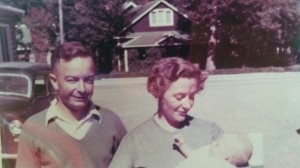 There is a peculiar calmness to intensive care units that I find attractive, something about the focus they inspire.  You are there because someone you know and love is seriously ill,  maybe close to death, you are caffeinated and single minded about your time.  You are present: life’s other exigencies fade to the background.  The beeping, blurping and flickering of machines that track patients’ well being, the nurses checking computers and efficiently taking care of patients.  Visiting family and friends quiet, focused and somber.  The brightly colored outfits that the medical personnel wear seem at odds with the gravity of the situation.

The Little Brown Geologist, so-named for his stature, preferred wardrobe color and trade, had fainted while waiting to prep for a cataract operation and never fully regained consciousness.  A plethora of tests indicated that he had suffered a significant brain injury due to oxygen deprivation (the faint may have actually been a stroke) and recovery was likely to be long and arduous, and uncertain.  I made it up to Calgary in time to listen to Dad’s doctor describe his situation and concur with my siblings and Kirsteen, Dad’s wife, that we should make him comfortable and avoid radical intervention.  He died barely 12 hours later. 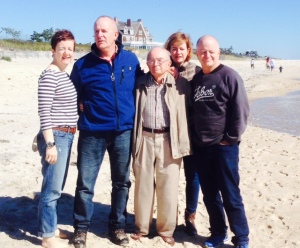 Dad, 88 years old, lived a full life: born in Ceylon, off to boarding school, the depression and war, then to Peru before settling in Calgary in the ’50s where he spent the rest of his life.  He mellowed considerably in old age,  loved his grandchildren and will be sorely missed by Kirsteen and the family.  We were touched by all the folks who came to his funeral on a cold, snowy day and going through his belongings triggered interwoven clusters of memories.

My baking obsession continues:  I did a week long class in January and in the Spring, my good friend Tony helped me build a brick oven in our back yard.  Let’s be honest, Tony – a true craftsman – built the oven and I worked as his day laborer, moving two tons of concrete and refractory brick into place while he welded, laid brick, poured, cut and assembled.

I fire the oven with propane, have jury rigged a pressure cooker to generate steam and have developed a feel for how it works (Every brick oven has its own character).  Our garage is now about 1/2 bakery – my family is very happy to have my flour-spreading ways out of the house,  I bake 40 – 50 loaves every Saturday;  if you are in the area, come and bake with me!

Lexie is in her fourth (Senior for Americans) year at U Vic and is flourishing in her social work program.  She counseled at the camp near Yosemite again this summer and is learning a lot working with complicated peers and clients at a women’s shelter in Victoria.

She used her high school graduation gift to spend eight weeks in Indonesia, traveling alone and learning how cool it is to let things unfold, meet fellow travelers whose wiring, plan, and lives are structured differently than your own.  What’s not to like about spending low key days by a glistening white sand beach framed by a turquoise stretch of warm ocean?

Liam is traveling a lot – he just got back from a second trip to South Africa – and is very pleased because a number of his products, which include wheels, decks and trucks, are

selling well.  He moved back from Los Angeles in the Fall and is looking for a place to live in the East Bay with a couple of buddies.  The rental market is white hot – blame it on Google, Facebook and Twitter – so the search for a place to lay his head is challenging.

He is stylish, with carefully selected crisp shirts, sunglasses, jeans of a certain cut and skate shoes that only a discriminating sportsman would wear.  He continues to film terrifying videos, including this feature length one.

Liam does a lot of highway driving (down to Los Angeles and back several times a month) so we have traded cars.  And just in time too: the Jeep’s engine fried shortly after the exchange due to a failing water pump.  We continue to provide our mechanic with a steady income.

Jennifer and I spent Thanksgiving in Mexico City, staying with a friend and spending days exploring.  What a fine place!  A mix of New York, Southern Europe and a hint of India.  We ate amazing street food and dined at a couple of excellent high end restaurants, rode the efficient subway and bus system and walked through fascinating neighborhoods every day.  At night we took Uber to a couple of jazz clubs and Nubbie particularly liked Frida Kahlo’s house (Now a nicely curated museum) in Coyoacan.

Frida’s art is lighter and brighter – more creative – than what her mural painting husband Diego Rivera created and evidence abounds in her house how much she suffered – Polio as a child and a terrible bus accident as a young woman – and how that suffering informed her art.  Fittingly, we came upon a fellow visitor quietly sobbing in the main bedroom.

Leon Trotsky’s house – now a museum too – is in the same area and it was full of suitably grim black and white photos and displayed the offending (and deadly) ice pick.  I learned that he traveled with a retinue and a library:  I guess better to preach to the proletariat than have to live like them.

We attended the Messiah again this year and learned from the program notes that Handel composed it in less than three weeks, performed it first in Dublin where it was well received and then in London where it wasn’t.  And that the King may have stood during the chorus not because he was moved by the music – and moving it is – but because he mistakenly thought the show was over.  Go figure.

We hope that your holiday season is fine, that you connect with family and that all you know are blessed with good health and steady fortune.